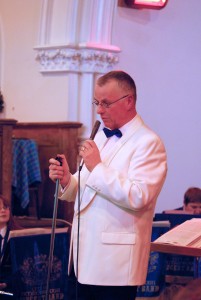 Our Musical Director is Henry Clydesdale, an experienced ex-military musician who was principal trumpet player in the Royal Army Ordnance Corps Staff Band.  He also led a successful dance band for a number of years.

The City of Peterborough Concert Band is a lively and dynamic group of local musicians who perform regularly in the Peterborough area.  Formed in 1987, the band is made up of people of all ages, with members as young as 15 and as old as 87. All band members show great commitment in attending most rehearsals and performances. 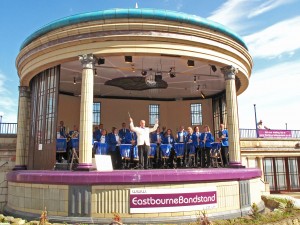 The band has a comprehensive library of music and is able to undertake many types of engagement, and can provide music for all occasions – formal dinners, church services and fetes, as well as performing a full concert programme for charity and other fundraising events. Co-operation with other groups leads to performances in association with local choirs and young musicians. Please see the Events page to learn about our current bookings.

This website uses cookies to improve your experience while you navigate through the website. Out of these, the cookies that are categorized as necessary are stored on your browser as they are essential for the working of basic functionalities of the website. We also use third-party cookies that help us analyze and understand how you use this website. These cookies will be stored in your browser only with your consent. You also have the option to opt-out of these cookies. But opting out of some of these cookies may affect your browsing experience.
Necessary Always Enabled
Necessary cookies are absolutely essential for the website to function properly. This category only includes cookies that ensures basic functionalities and security features of the website. These cookies do not store any personal information.
Non-necessary
Any cookies that may not be particularly necessary for the website to function and is used specifically to collect user personal data via analytics, ads, other embedded contents are termed as non-necessary cookies. It is mandatory to procure user consent prior to running these cookies on your website.
SAVE & ACCEPT